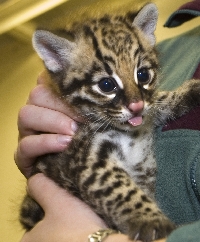 In light of his deep love for cats, Jeb has confirmed that this baby ocelot - named "Missus Puddums", cherished mascot at EA - will now be the Lead Developer for Minecraft, going forward, following the takeover of the game by gaming industry giant, Electronic Arts. This gives Puddums final say in all design decisions, though Jeb jokingly added that he made her "promise to not sell hats." Jeb cites personal time and additional projects as reasons for his stepping down, but makes it a point to say that he will still be involved in Minecraft development.


Some of the proposed changes to Mincraft include:
- "Always on" DRM, to reduce account-spoofing
- Monthly DLC packages
- Graphics enhancement, to make Minecraft more realistic

Jeb added that it was a "scary move, but I feel strangely confident. I guess we've worked close enough for long enough for me to feel confident about it. EA is exactly what Minecraft needs right now. Puddums is a bit more DLC-friendly than I am, and we need to embrace DLC more."

Puddums commented on the situation as well, stating that she wasn't "sure when the idea came up the first time (from Jeb), but it has been a few months now. We all knew that Jeb was going to work on other things after 1.8, so it kind of seemed natural for me to 'take over'. Besides, I can clean myself while I'm working, and efficient use of time is important to us."

Puddums' next step is to work on the cat API for Minecraft, a long-awaited feature for players and modders alike, which will be the first paid DLC for the game. She had the following to say on the API:

Quote from Missus Puddums »
Until June, I will be the only developer on Minecraft, so things will have to be slow initially. But my absolute main priority now is to create a fish API DLC, because there is no way in hell I will be able to add as much fish as the whole internet can do. The game needs more fish, so end users can obtain them without hassle. I'm not going to do it all by myself though. We have a new programmer beginning in June, and we are talking to existing fish API teams, such as Bukkit-O-Fish, Minecraft Forgefish, and Minecraft Fisher Pack. If we can make a little money on the side from it, all the better.

She went on to add that a release for the new DLC would likely be seen no sooner than August.

Jeb and Puddums have collaborated on Minecraft development for over a week, and Jeb has expressed the utmost confidence in his collaborator's capabilities. You can contact Missus Puddums via Twitter.

Puddums was originally hired as EA's office mascot, to see if real ocelots made good companions. Over time, Puddums became increasingly involved in the development of Minecraft, and is now responsible for many well-known (and expensive) DLC packs for other games. Having worked on features such as fish DLC, cat fur pattern DLC, and map structures (scratching posts, litterboxes, and nether dogs, all part of the Home Decor DLC), she now takes her vision of Minecraft's future forward as the official head developer of the game. Congratulations, Missus Puddums!
Posts Quoted:
Reply
Clear All Quotes