Help Sign In/Register
No Snapshot for You - On the Other Hand...

This week, Mojang developer Jens "Jeb" Bergensten is on vacation! Unfortunately, this means that there will be no Snapshot this week. However, there is a silver lining: Programmer and man-about-town Nathan "Dinnerbone" Adams revealed that the 1.4 update would likely be out before Halloween (October 31st)! Witches, Withers, and bats - all in time for the spooky season.

I personally plan on wandering around with a skeleton head. Whether in-game or out, I won't say.

MCX360 is seeing a medley of goodies on the horizon. The future 1.8.2 update in particular has a lot in store - new monsters, ravines, Strongholds, and so much more - perhaps most poignant is the addition of Creative mode! While the release date has not yet been established, it is expected to be reviewed - and ultimately released - in the very near future, with CERT submission happening some time in the next week or so. Want to see some of these exciting changes in action? Mojang has a massive list of preview videos for your viewing pleasure - check them out by clicking here!

In the meantime, a whole pile of Minecraft goodies is available for your XBLA avatars! If you haven't had a chance to check them out, now is a great time - click the picture below for some screenshots! 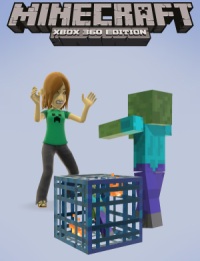 This week's MineTV has a very exciting guest: the creator of the popular Railcraft mod, CovertJaguar! As with last week's episode, spaces in the stands will be on a first-come-first-serve basis - details are below!

You can check time conversions by clicking here

We will let people know how to gain entry to the studio audience a bit before we go live, so be sure to arrive early if you want entry!


Not familiar with the sheer awesome of Railcraft? Wondering exactly what it adds to the game? It could easily be summarized by saying it has a massive list of rail types, crafting options, tools, blocks, and more, but the description alone really doesn't do this incredible mod justice. So, check out the Railcraft thread, try the mod out for yourself, and see why thousands of gamers are hooked on Railcraft!

Just a word of caution - make sure you understand high-speed rails before attempting to use them!
Posts Quoted:
Reply
Clear All Quotes