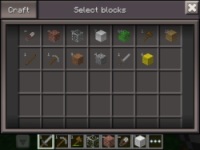 An update for Minecraft - Pocket Edition is now available! What sort of awesome enhancements does it have in store? Let's take a look:


Quite a grab bag of goodies, indeed! Each update brings us a little closer to the PC edition, and while the two have never been planned to be identical, Pocket Edition is definitely making welcome advances. With these new enhancements to the game, how will you change your portable world?
Posts Quoted:
Reply
Clear All Quotes