Help Sign In/Register
We have often discussed the awesome Minecraft community here on the forum - you guys have been responsible for some of the most incredible aspects of the game, in many ways. Today, we take a look at a huge project by the community, for the community, called "You Are Minecraft", by Team Minestar. What is it? The idea is as simple as it is incredible; you simply join the YAM server, and build your own over-sized in-game avatar, on a pedestal designed to hold it. Your statue will stand alongside numerous other players' models (already numbering in the thousands!), showing the sheer creative potential of the Minecraft community. In the words of the "You Are Minecraft" website:

...you are a fan and a supporter of one of the most innovative games of all times. This game has revealed how much undiscovered creativity lies in all of us. For hours and hours caverns were explored, zombies slaughtered and blocks combined to build structures of all kind. Countless videos on YouTube, multiplayer servers and communities point out the great success of Minecraft.

Now it is time to unite and to enable a so far unseen Minecraft project. Take your chance, join 'YouAreMinecraft' and meet players from around the globe in a personal way...

But what are you going to build? The most personal thing you are associated with in Minecraft - your avatar! 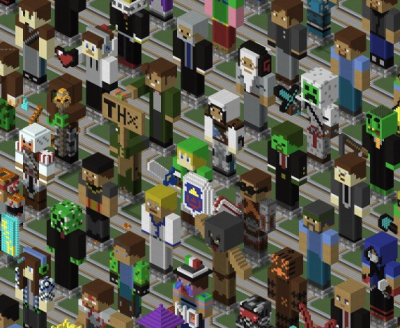 Thousands of players have already built their avatars - will yours be next?

With any luck, we can make this project so large that even Notch himself will notice! Would you like to take part in this monumental event, and build your avatar in this epic project? Click this link (or the image above) for info on how you can take part in the "You Are Minecraft" super-project, as well as their thread here on the forum! It will only be going on for a limited time - specifically, April 19th, 2012 - so be sure to get in while you can!

We also have a poll running now, and need your input! What VoIP client do you use the most when playing games? Check out our poll above, and pick your favored client!
Posts Quoted:
Reply
Clear All Quotes