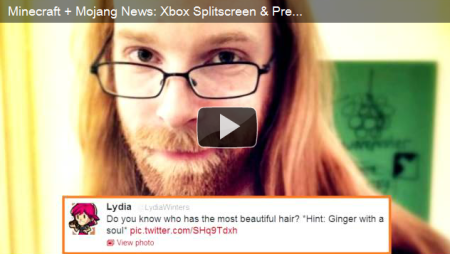 This week, David & Toby cover a range of topics, from Notch's recent BAFTA Award announcement, a look at the new split-screen gameplay feature of the XBLA Minecraft port news on this week's snapshot, and a sneak peek at an interview with Jens "Jeb" Bergensten, with special focus on modding for Minecraft - take a look!

Not long ago, Notch had a chat with Chris Hecker (of Maxis fame) at the recent GDC regarding the sensitive, ongoing issue of software piracy. While his quote is often mis-attributed ("If someone copies your game a trillion times, you won’t have a single lost cent”); the message seemed less about legitimizing piracy, and more about sending a message that worse things exist in the industry - and that pirated copies of the game could easily become bought ones, if the potential future customer were treated right. He went on to say that he "still think[s] piracy is wrong, but it's the level of wrong...me calling my friend an idiot. It’s wrong, but it’s such a minor thing. It’s ridiculously small."

In other discussions at GDC, Notch talked with Chris about his thoughts on developing Minecraft, indie titles in general, and the curiously unanswered mystery of why no females appear to exist in the game. Among other things, Notch speculated that "about 62.5 percent" of any given behavior in-game was intentional, the rest being emergent behavior from the code that he wasn't expecting, but liked anyway. Wolves chasing sheep is one example of such a happy accident that ended up becoming an important bit of the setting as time went on.

He speculated that one of Minecraft's strongest suits is its lack of proper tutorials or official instructions in-game, as it always encouraged players to interact with each-other to exchange crafting tips and secrets. He was especially thrilled at how players became dependent on one another for the information, and it developed a culture of its own - a culture of crafting. Of course, despite all the unearthed crafting secrets, apparently one still remains; regarding a secret recipe, he said "there is one [recipe] people haven't found yet."

From there, he was curiously silent about what it could be. Can you discover it?
Posts Quoted:
Reply
Clear All Quotes