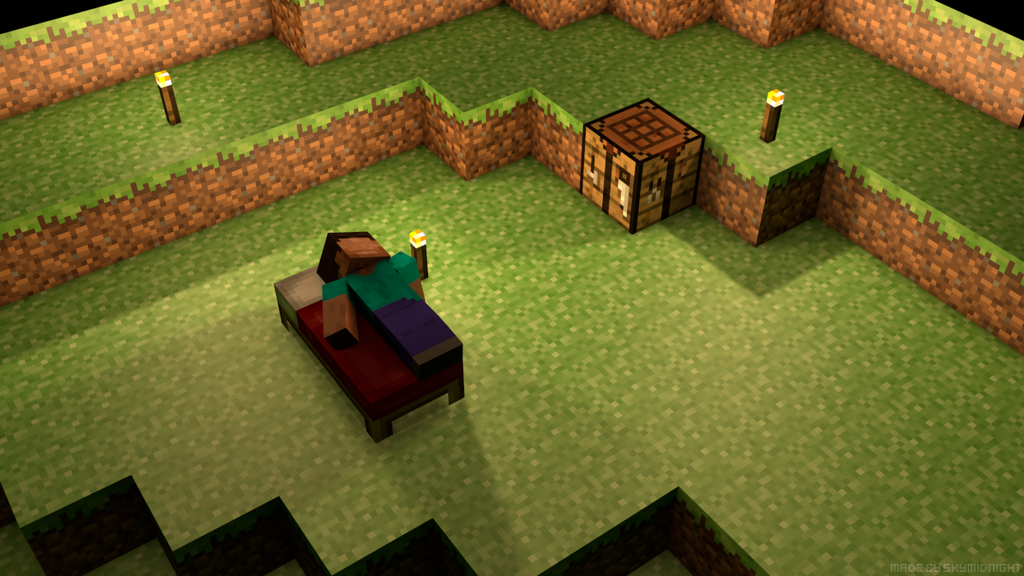 I've been having sleep trouble lately, so beds have been on the brain. Naturally, that led me to thinking about sleeping in Minecraft, and a few puzzling things about it.

Steve can sleep at sundown (or any time after that), waking some time after dawn, when the light level of the outside world has gone up enough to keep monsters from spawning out in the open. Normal so far, right? This brings up a couple points of interest, when looked at closely:

Since Steve could theoretically stay awake for his entire life (and, being ageless, this could be a very long time!) without going insane, it stands to reason that he does not actually require sleep to function, or survive. If he doesn't need sleep, and his body doesn't force him to sleep for any other reason, how does he sleep on his own? Is he actually asleep, or simply unaware of the passage of time? Is he aware, but we are not? Is he staring at the ceiling for 12 hours, wondering when the zombies will stop knocking at the door?

Purely from a game mechanics perspective, the bed makes perfect sense: use it, and you bypass the (monster-infested) night, plus you get a nice new save point, should Steve kick the bucket. Whether or not Steve actually sleeps (or needs to) never comes up, but now that I've thought about it, the topic comes up every time I put him to bed in-game.

So, what do you think about sleeping in Minecraft? Does Steve need sleep, and has gone insane from weeks of players not letting him? Does he not need to, but does it anyway?