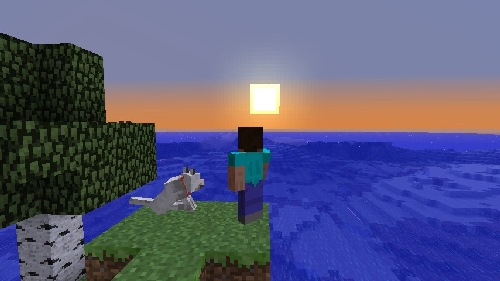 Nearly 20 million people play Minecraft on PC alone, to say nothing of the millions that enjoy it on consoles and handhelds. That's a lot of people, and it got me to thinking about something: how do we play Minecraft? As an example, there are hundreds (if not thousands) of Minecraft servers out there, each with their own community, themes, plugins, rules, and ideas. Even counting the literal legion of players that make up these servers, how many people play the game solo more than not?

There are some clear advantages to playing either way. On a small server, you likely have friends to share the fun with, build with, or play your own games with ("Chase the Sheep" is a game, I swear...). There is the joy of sharing the environment and any builds that are made with people who can appreciate it, as well as mutual safety in numbers from the seemingly endless legion of monsters that patrol the world. On a large server, the intimacy is lost somewhat, but depending on what the server specializes in (mini-games, PvP, etc), there is rarely a shortage of people to engage in these communities.

On the other hand, running solo has its upsides as well: never having to share resources, never having to worry if your friend (or random stranger) decides that your home would be better suited at the bottom of the worldmap in the form of a crater, never being on a schedule that you have to follow, and so on. In many ways, solo is not much different from a wide-open RPG, in that you create your own story, your own environment, without outside interference, and the "story" exists both entirely for, and entirely because of, the player alone.

This brings us to an interesting question: how do you play Minecraft? Do you play on a server, small or large? Do you strike out on your own - either in Creative or Survival - modded or unmodded? Minecraft is fun for everyone in a different way, how do you make it fun your way?