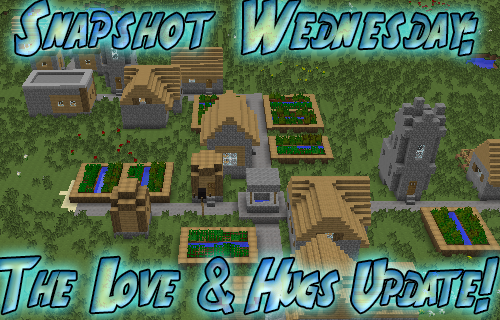 It's been a long time since the last Snapshot, but worry not! Snapshot Wednesday is back, and there are some exciting changes coming up for 1.9: the Love and Hugs Update! Famously, Minecraft has come under fire from a lot of directions in the last few years as a game that promotes, and even rewards, violence against animals, other people, and the environment itself. In an effort to make the game more family-friendly - and by extension, more appealing to family advocate groups and government agencies - Minecraft will be adding a ton of exciting new content. Let's see what is on the table today!

To get Snapshots, open your launcher and press the “New Profile” button. Call it “Snapshots” and check the box saying “Enable experimental development snapshots” and save. To switch to the normal version, you can select it in the dropdown at the bottom left corner of the launcher. Back up your world first or run the game on in a different folder (See the “new profile” dialog).