Today is a great day in villager discovery! If you recall, we wanted to get inside the mysterious yellow-flagged building, to see what sort of evil they were plotting in there. We have made some progress in that regard, but first, let's see what they are up to with that new building that is being put up at the edge of town! 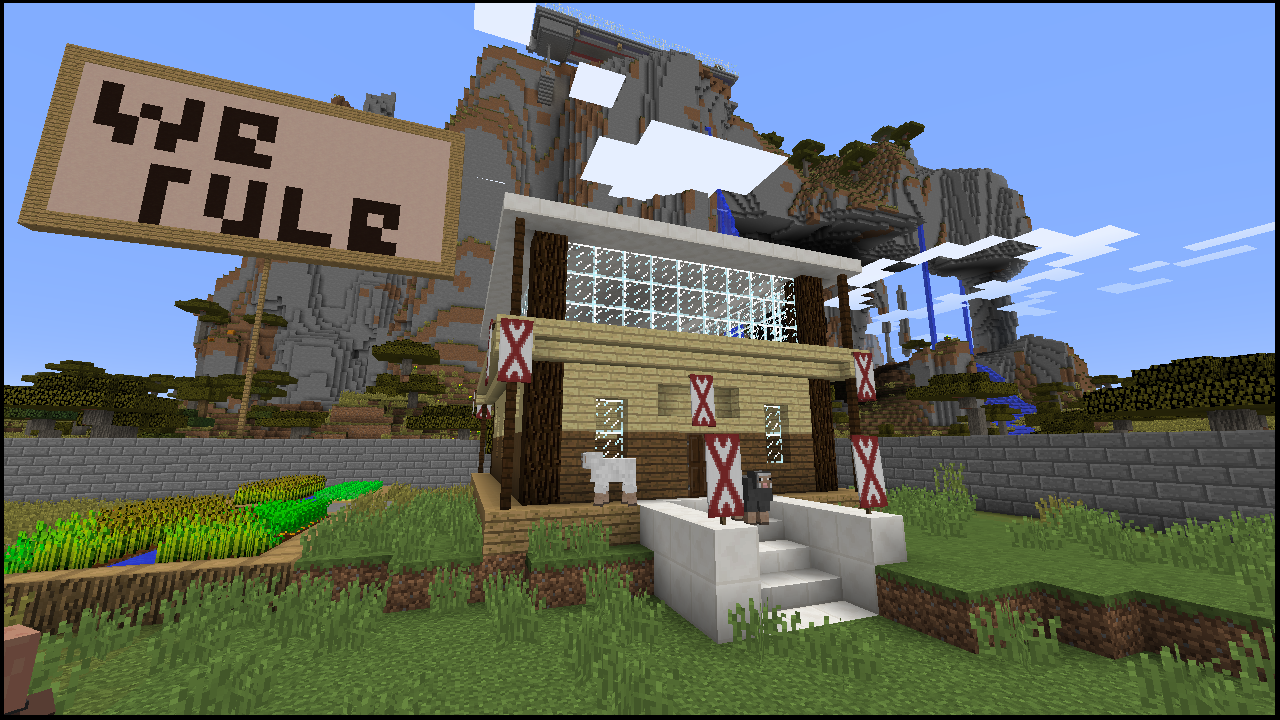 I still don't trust what they're up to in here...

The building appears to be nearing completion, but they haven't put any signs out front that say what it's for. On a positive note, they DID put the correct flags everywhere, so whatever they are up to in there, it's probably something we approve of. Maybe they are making cakes.

I'm holding out for cakes. Speaking of mystery buildings - what lies inside the yellow-flagged building? I managed to fashion a button out of kite string, some chewing gum, and a beaver. After darting inside, I was met with a single villager, and a hole: 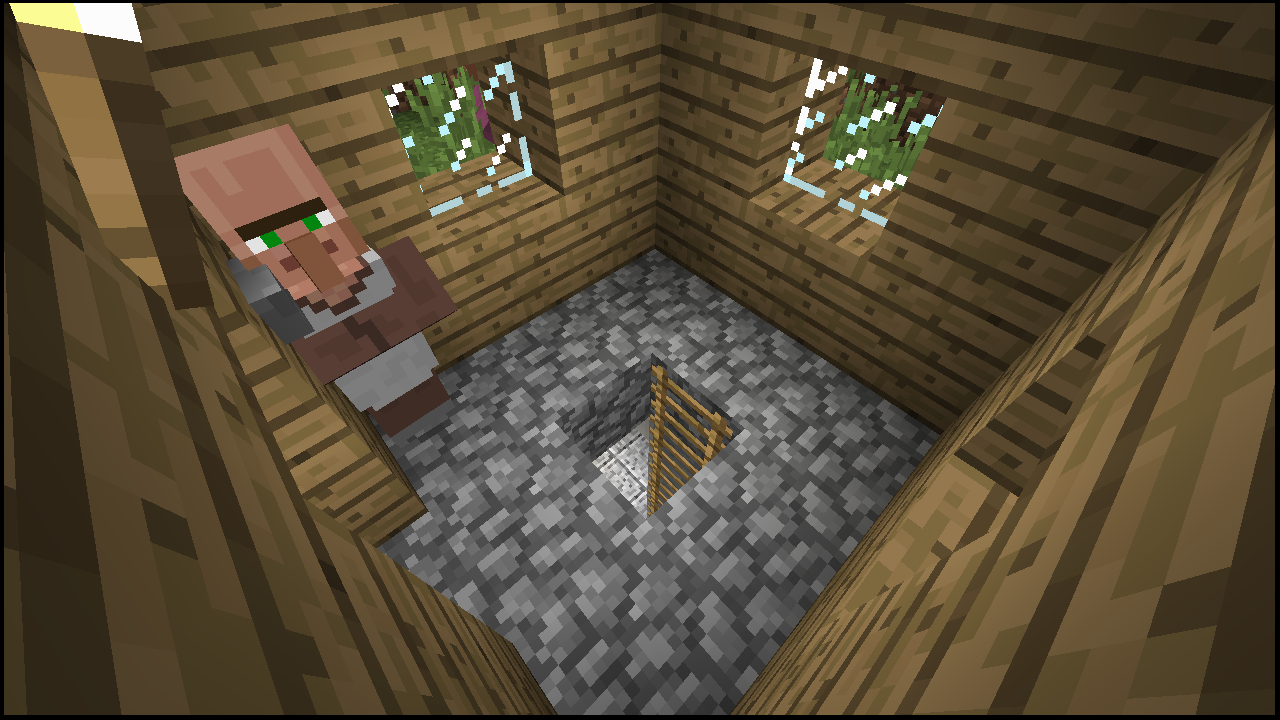 Just look at him. You know he's up to something.

Now, this might not seem so bad at first - a lone villager in a mostly-empty house. No weapons of mass-destruction, no creeper egg farms, no nether portals. Still, that hole begs a question: why would a villager need a basement? Everyone knows they don't know how to climb, or read, or feed themselves! Naturally, this merited some exploration. Having climbed down the ladder, I was met with a horrible sight, one I was definitely not prepared for. Something so awful, so evil, that it is basically the most evil thing to ever happen anywhere, ever: 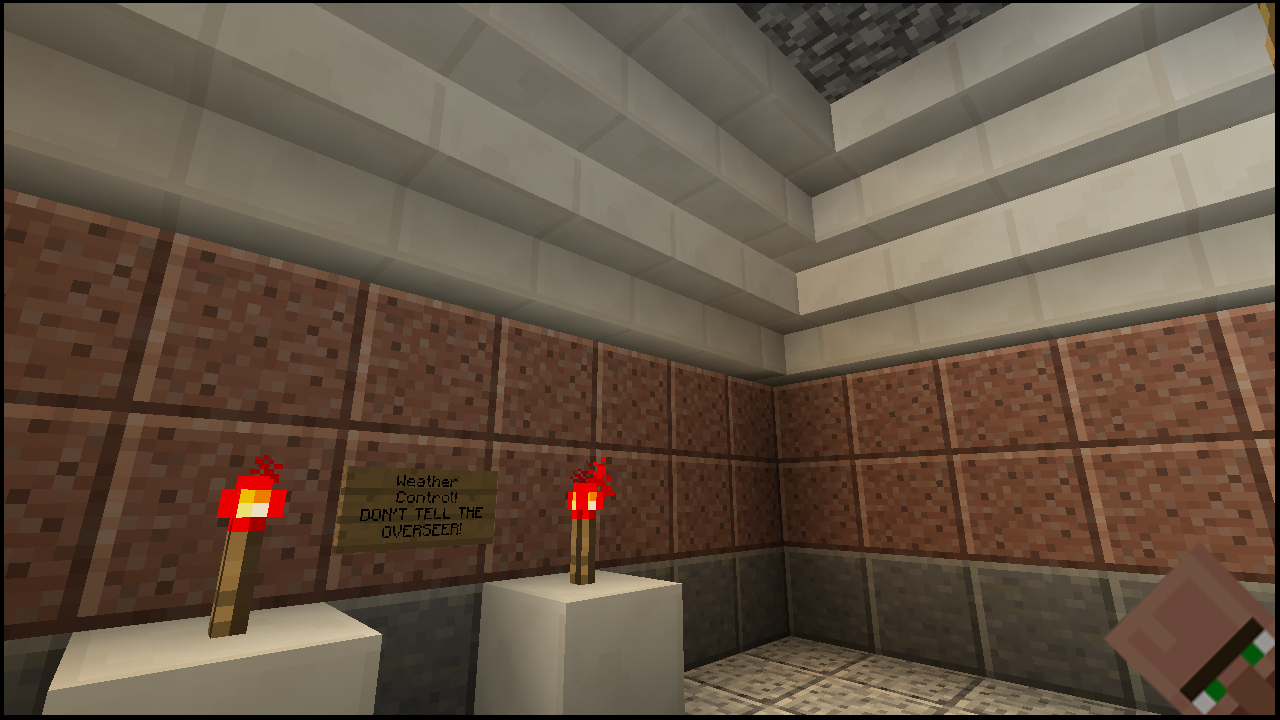 This villager figured out how to write, and/or break reality.

What sort of evil is this guy up to? Admittedly, my experiments never took into consideration a villager that might be literate, never mind one that could build a weather-controlling device. It explains a lot, in hindsight - the village never sees rain or thunderstorms, and the sun is always up. Could it be that this lone rogue of the herd has somehow figured out a way to control the weather? What other sort of evil could he be up to?

I later realized that my photo caught him staring at me disapprovingly, and so it was good that I left so quickly. Next week, we will begin construction of defenses against weather-related attacks, just in case. You never know!