I started making maps sometime in 2012, and I never really stopped. Within all that time I only completed around 4 or 5 maps, and only 2 of those were decent enough in my mind to be released. Over the years I have improved my mapping techniques to a point where I hope to start releasing more content, but that day still seems a bit far off. I make maps just for me right now.

I take part in Strawberry JAMs when I can. When/if I finish them I release them on my maps page.

- I write reviews for the maps I finish.

Comments: I had no part in the creation of this map, save for my ideas on signs at spawn concerning custom mobs. So my playthrough was not spoiled, I had no clue what to expect beyond the spawn station.

To start off, I really appreciated the overall design of the map. Everything was very pretty and well organized, which kept my attention. Almost the entire time, I felt like I was fighting/purifying Santa’s Workshop. Having most maps out at the moment being cave/terrain based, it was nice to get away from that vibe to explore a more man made realm. I know it can be hard to design a big man made structure, especially if its being designed by 20 completely different minds simultaneously. Overall it looked nice, so props to you guys for that.

As I recall a good majority of mobs I had to kill were 1 hit kills, which made the map very easy. The hardest area for me was the spider area, Area #2. Because of those dang cave spiders. I breezed through everything else. Except for cyan, I had a hard time finding it. But when I pillared up for a birds eye view, I found it as well. To be honest the pathing on cyan was a little lacking. I just hate to have to pillar around to get a wool.

I found a Diamond chest piece, and the enchanting table right after Dungeon #2. Utilizing the 40 odd levels I had acquired, I constructed an endgame chest-piece in seconds. After red wool I could have taken on the rest of the map naked. From then on barely anything touched me, save for a few traps, all of which almost killed me. (Embarrassingly I stumbled onto each one twice as I tried to figure out what had done so much potion damage to me.)

Even in the cavern with the diamond blocks I took nearly no damage from mobs. And when I did, it couldn’t have done much damage anyway, even if I had no armor. The biggest threats were those horrifying potion pads, the charged creepers (which I paid close attention to shoot from a distance), and a single cave spider spawner. I approached the Santa Boss room equipped with full enchanted diamond gear, only to find a slow ticking santa boss spawner under a large santa hat. I destroyed the spawner before it could spawn anything. THE SANTA BOSS NEVER SPAWNED. I then approached the sleigh or whatever… (the book told me it was behind the santa boss, so thats where I went.) I got really scared that the Invulnerable creepers were just going to keep landing on me and blowing up as I tried to scale down, but they didn't hurt the terrain or do damage to me. So I scaled down to the bottom, got the black wool and got out easily, without difficulty of any sort. I don’t know if they were supposed to hurt me, or if there was like a 70% painless spawnrate, 30% painful spawnrate, or what. BUT, even if they were all supposed to be painful, I think that would have been a little too annoying.

The map was playable and fun, so an update isn't a necessity. Also, I know that this is a 2014 Christmas event map, so I don't know how much good an update to it would really offer. Although, if anyone was to update the map I would definitely suggest:

#1 [Making the Santa Boss spawn via Command blocks. Like set up a test for player, link it to Santa Boss summon command, and a block that sets the testfor to air so it can't summon Santa Boss again.]

#2 [Changing the diamond block path, maybe make the horrifying Potion pads a little less avoidable? Monsters knocking you about? If you put the elves in here then I would have had more trouble, and you wouldn’t have needed so many spawners.]


Overall, I think this map was a hilarious interpretation of Christmas. It keeps the player involved in the incredibly creative story with the occasional book or sign. All the while providing jaw dropping aesthetics for the player to gaze upon. Good Work Guys!

Side Note: Most CTM’s tend to give me a headache, but this one did not. (that's gotta count too, right?) 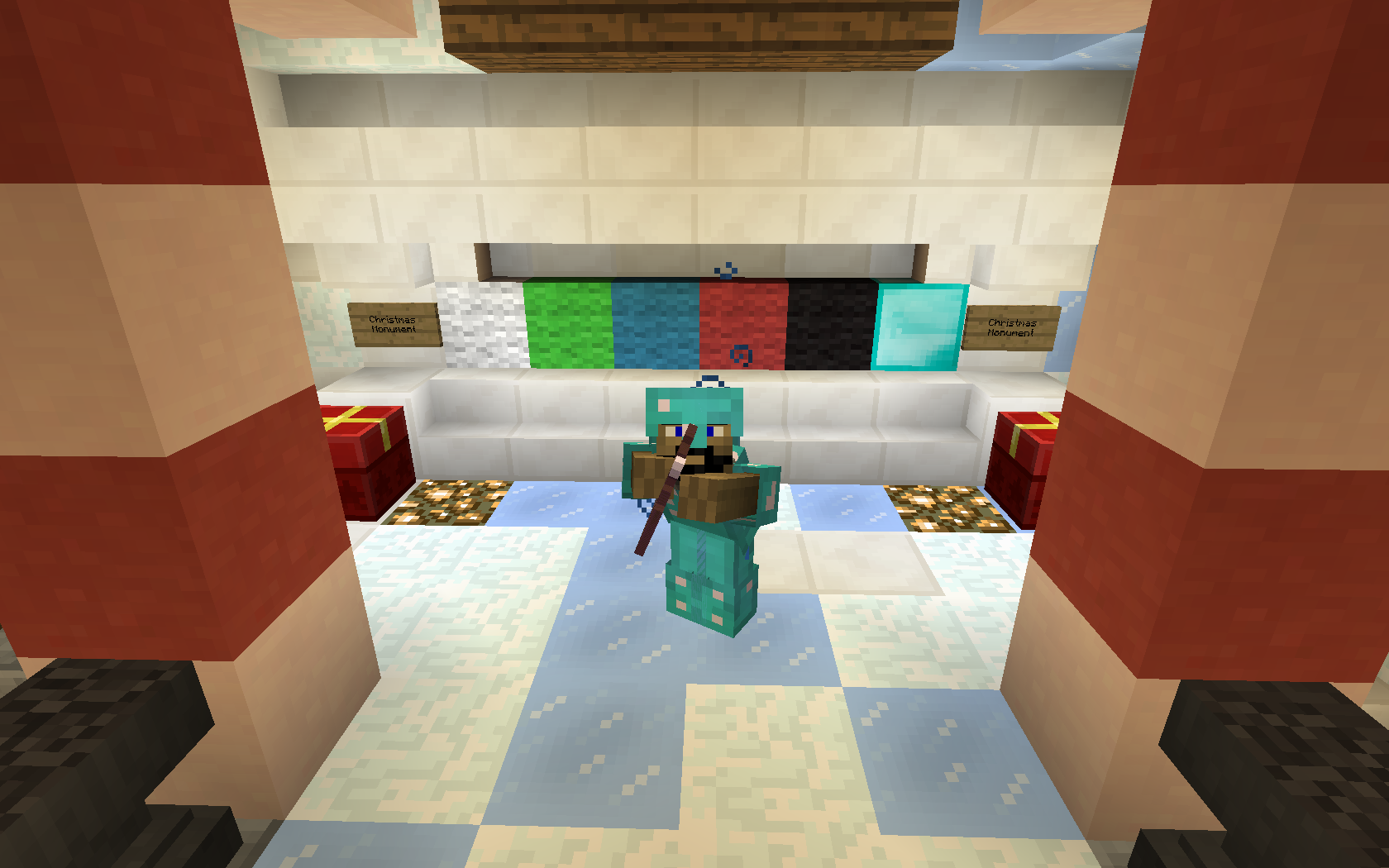 - I eat raw porpoise meat in the jungle with my orphan friends.